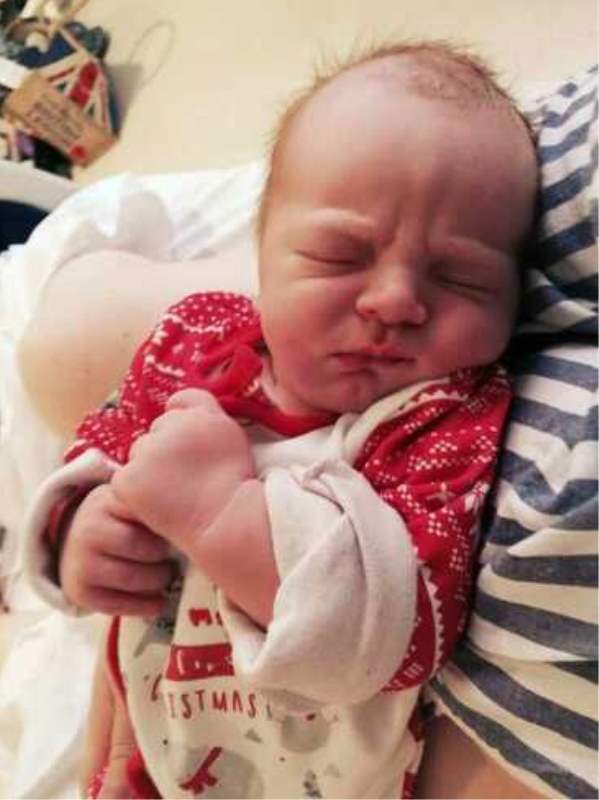 After a bleed on Sunday the 23rd December 2018, I went to Lister hospital to be checked out. After being monitored and my lady garden being examined I was advised to be induced. The doctor was great but not very informative.. Another doctor followed in to explain some more. I was moved to a ward where the induction would happen. James went home to get me supplies to entertain myself. However after being examined again, I had already dilated 3cm. The first option of induction couldn’t happen and I was advised that the next step would be to break my waters, I was relieved as I didn’t really want to be induced.

I spent the night on the ward and I sent James home.. The chairs were awful!! That night a lady came onto the ward also at 3cm, she did incredible and left the ward about 5am at 8cm…i didn’t sleep much that night. I was on this ward for what felt like an eternity, on Christmas eve night I was feeling quite anxious and didn’t want to spend Christmas day waiting around when I felt okay. James asked a Midwife to come and speak to me and she came bearing good news.. There was a room for me, down to the consultant led unit I went.

My wonderful midwife Lucy asked me if I had a birth plan, I panicked and said no.. Which was true, I hadn’t written one but I just didn’t know how to talk at that moment!! When she returned I told her that actually I had done a hypnobirthing course, would like a pool and minimal pain relief unless I asked for it .. She said if a pool came available we could try and nab it.

My Midwife Lucy was wonderful.

Then the fun started. I was hooked up to monitors to check all was okay before my waters could be broken. Babies heart rate was high and they eventually put me on a drip to hydrate me, this seemed to help.
Lucy examined me and broke my waters at around 10pm. I was examined not long after and was at 4cm. I had begun to use my hypno birthing techniques, I was solely concentrating on my breathing. I wanted to be more active but my body felt so weak and I kept getting severe shakes. The pain was quite bad in my back; Lucy checked and said baby had turned slightly and was a bit back to back.. We rode it out and thankfully baby turned again.

James kept my water and juice topped up.. He says he felt useless but actually he couldn’t have been any better, he knew I needed space and every now and then he reminded me how well I was doing. I was on another planet. Another hour passed and contractions were increasingly stronger and more frequent. By now the Christmas songs on the radio were doing my head in and I didn’t want to hear about rudolph anymore, I asked James to put Ben Howard and it sounded wonderful!

Lucy examined me again- I was 5cm. It felt like forever. The pain was really stepping up and I felt like I wanted to scream. I asked Lucy when gas and air could come into play.. She said now if I liked! I was at the point where I thought I can’t do this.. Maybe I do need more pain relief. But I never voiced this because deep down I didn’t want these thoughts responded to. So I took gas and air and by god I’ve never experienced anything like it.

Within another hour I was 7 cm. Lucy was back.. She said to me “you won’t remember half of this”.. So true but I remember her saying that and her kind face and words of encouragement telling me how well I was doing. By now I didn’t know what time it was and Lucy was right.. I barely remember anything.

I was stood over the bed for over an hour and Lucy asked me if I wanted to have the baby standing up, I didn’t plan to and felt like a change so moved onto all fours on the bed. I was in this position for some time too.. When it came to it I puuuuushed and I screeeaaammed and I apologised for my profanities. By this point my calm and quiet breathing patterns were out the window but “relax your jaw” echoed throughout and I did still try and breath through it (…using gas and air). Lucy told me to really use my energy to push into my bum. “oooh babies got dark hair!” Lucy said. The baby was really nearly here!!

Baby wasn’t coming round the bend so Lucy and Sheila (a senior midwife who came to join the party) told me to turn onto my back, after a few more pushes and a lot less screaming out baby came.. they plonked baby on me and I couldn’t believe it. After a minute or so Sheila said “do we know what we’ve got?!” with all the excitement we hadn’t even checked the gender!! James looked.. I had just given birth to a gorgeous 8lb15oz ginger baby boy.. Definitely not dark hair Lucy! At 6:06am on the 25th December 2018. I was in awe, I couldn’t believe what had just happened. Not long after the salvation army were walking the corridors playing Christmas music, it was so surreal but so magical. The best Christmas ever !
Darcie did incredible! I love that throughout she just heard the echoes of my voice 🙂 She did a 6 week womens only hypnobirthing course with me and we always kept in contact. This story is so moving as it shows the power of hypnobirthing, the power of listening to your body but the most important thing was that she went with her body and didn’t fight it.

Thank you Darcie for sharing!