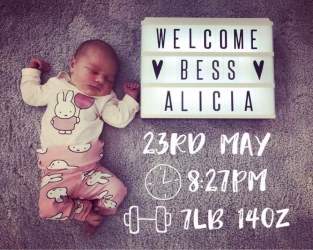 Bess Alicia Lawrence was born at 8:27pm on 23th May weighing 7lbs 14oz and we are completely smitten.

I was 41+2 and emotions running high as at 40+2, at my midwife appointment, they already wanted to book in an induction! But I said I wanted to wait and also declined her offer of a sweep at 41 weeks. It was a long week and had a few wobbles along the way but Wendy was amazing and provided support and reassurance. I attended one of her Relaxation classes at 40+3 which helped to get my positivity back on track and just being in Wendy’s company makes you more positive and confident.

I woke up that morning feeling disheartened that another night had passed and nothing had happened as I was sure it would start during the night. I went downstairs and felt a bit wet down below. It was only a little bit of water so tried not to get too excited but then within 10 mins I was getting my ‘show’ which I thought at the time was mixed with the amniotic fluid as it was watery. I decided to call the hospital to talk to them, as due to the colour wanted to check it wasn’t meconium. They said we should come in so they could check for sure it was my waters. During this time I was getting mild period type cramps so was excited that this could really be the start of things! I woke my husband up and we packed all the bags in the car just in case we couldn’t return and off we went. In the car I noticed that the cramps were getting slightly stronger and every 5 mins.

Once at the hospital they said they wanted to check for sure if my waters had gone and I agreed. It turns out they hadn’t and it was just my mucus plus coming away which was quite watery. They said we should go home and wait for things to progress. So we went home via a trip Halfords and Costa where I sat having a hot chocolate as my surges started to increase in intensity so decided I would be a bit more comfortable at home!

So we got home and set up the lounge with candles, music and clary sage and lavender burning. From this point the surges started to increase further in intensity and get closer together. They also made me sick which surprised me after having no sickness during pregnancy. I kept moving through each surge on all fours on my yoga mat and breathed through each one. After being at home for 3 hours they were already 2-3 mins apart and lasted 1 minute. As I really wanted to use the pool I asked Tom to call and see if they thought I was ready to come in. So he called the Mulberry and they asked the usual questions to establish where they thought I was. They wanted to speak to me which I think is normally but I was mid surge and think she must have heard me making a noise and when Tom said we were Hypnobirthing she said that not to worry as she didn’t want to disturb me and to come in and they will start running the pool.

When we got to the hospital my waters went as I was walking down the corridor. This time I knew it was that as it was quite a lot and had to waddle the rest of the way to the Mulberry!

We were taken to a room and met the lovely midwifes. They let us settle in and they reviewed my birth plan. They were really supportive and said there is nothing in there that they didn’t think was possible and were also very intrigued by the Hypnobirthing. The midwife came back and said that although I said I didn’t want examinations that she thought it was a good idea at this stage as to not get in the pool too early and slow things down. But it was my choice. I spoke to Tom and I agreed to have one at this stage. It was the right decision as turns out that I was 2-3cm and whilst I knew it was only a snapshot and things change quickly we decided to just keep going in the room and not get in the pool just yet which looking back was the right thing for me. It was only within another 2 hours that my surges came with a lot more intensity and whilst I was managing to breathe through them all on fours on the bed I got to the point I was shouting out to get in the pool. I was still being sick too which made things a lot more uncomfortable. The midwives could tell by looking at me I think and said they will get the pool ready and that there was no need for another examination. It took what seemed like forever to get it ready and I remember I kept shouting out, “is it ready yet!”

When I got in the pool it was so amazing to feel the relief of the water and made me a lot more relaxed. I also stopped being sick. After a small while in the pool I managed to zone out. I didn’t open my eyes or say anything for about an hour or so and they thought I was falling asleep as my arms kept slipping off the side into the water! I think I was in there for about 1-2 hours when I started to get the pressure in my backside and getting ready to bear down. I breathed down through each surge and it took a couple of hours as I didn’t want to force push and let my body guide me. I was kneeling when the head finally came out and I looked down and waited for the next surge when I guided my little girl into this world up and out of the water. I then sat up in the pool for a few mins with her on my chest to take it all in. I watched as she found my nipple all by herself and had a little feed. I got out to deliver the placenta naturally whilst leaving the cord pulsating. She was covered in vernix but she wasn’t washed or wiped and it soaked in really quickly and now she has super soft skin!

We went back to the other room and I laid on the bed with her on my chest whilst they checked me over. I had no tears which I think was due to the water, no forced pushing and the perineal massage. I had lost blood on the slightly high side and there was some meconium that came out with her head so they wanted me to stay overnight on the ward just so they could keep up the observations for 12 hours. But they said to take our time and we stayed in the room for another few hours, during which both Tom and I had lots of skin to skin and was feeding on and off.

We then went to the ward and spent the night just laid there, her just in a nappy, on my bare chest, skin to skin all night, which was amazing and I’m sure that together with the relaxed birth contributed to the fact she is feeding really well and a very calm and content baby.

So it was 12 hours from start to finish and 5 hours recorded established labour which I think surprised the midwifes but all the date eating must have paid off!

We want to thank Wendy for all her support. Her Hypnobirthing course set us up with a positive and relaxed mindset, empowering and arming us with the knowledge and tools and techniques we needed to enable us to have a positive birth experience. Whilst I did get my Birth ‘Plan A’ amazing experience I felt we were empowered and armed with the knowledge we needed to have made any decisions and navigate our way (to Manchester!)