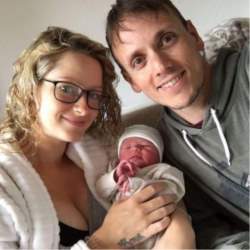 It was a new moon, which we hadn’t realised (but now love how fitting that was), and I woke up around 8am with period pains coming at the same time as lower back pains. I thought it felt a little different to any twinges I’d had before but didn’t want to over-think it. Throughout the day, the feelings were getting a little stronger each time but they had no pattern to when, or how often, they were coming so I just carried on as normal (shopping and having cream tea at Redfields Garden Centre!). By lunchtime, I knew the feelings were definitely something because it didn’t matter what I did, whether it was sitting, standing or lying down, they didn’t change. By 5pm, the ‘period pains’ were getting stronger and were coming more regularly and by this point I knew that they were in fact small surges, but I still wasn’t confident enough to tell Martin how sure I was. I carried on with the evening as normal, had some friends over and cooked dinner. Our friends left at 7pm knowing I was having ‘strong period pains’ but I hadn’t said the big ‘L’ word, however as soon as they’d left I told Martin I was pretty sure this was labour! By this point, surges were coming about 4/5 every hour and, although I didn’t quite need to change my breathing to cope with them, I couldn’t think about anything else with each one. By 8pm, I had messaged Wendy and told her what I was feeling and asked if she thought it was too early to put on my TENS machine. The surges were coming 1 or 2 at least every 10 minutes and were getting stronger. Of course Wendy replied with the most supportive and excited message that made me feel amazing and reminded me that ‘actually, I CAN DO THIS’! Her message really took away that last little bit of anxiety which was lingering. I stopped doubting myself and listened to my body and thought “wow, our baby is coming”! By 9pm the TENS machine was on and was working its magic. I was slowly working up the pulses of the TENS machine so that it would distract me as much as possible from each surge. Martin was setting up the pool and I was watching Harry Potter (my absolute favourite!). Between then and around 10pm, Martin had been timing my surges and when I said “I wonder if we should let the midwife know”, he told me that my surges were lasting 50-60 seconds, and coming about 3 every 10 minutes, I was so surprised to find out that they were coming so close together.

Whilst I knew I needed to close my eyes and breath with each surge, I didn’t realise they were coming so regularly. I started to get quite anxious and everything seemed to be irritating me (even Love Island!!!). After debating what to watch next on tv, we decided it was best to turn it off, which is when I put on Wendy’s 5,4,3,2,1 mp3. I felt myself immediately relax. Martin called the hospital and we had the midwife arrive about 11.30pm. Whilst waiting for the midwife to arrive my legs were very shaky which I didn’t expect, but once she (Mandy) arrived I completely realxed knowing someone else was there and she told me that the shaking was completely normal. The first thing Mandy did was calmly introduce herself and read my notes and our birth plan. She then came in to see me, explained what she was going to do, and took my ‘obs’. By this point I was having to really focus on my breathing techniques to help me deal with each surge, but I still knew I could cope with each one. Martin and Mandy were very good at falling silent and letting me focus through each surge (thanks to me clicking the ‘boost’ button on the TENs maching at the start and end of each one). I was quite surprised at how normal I felt in between surges and I was able to chat with Martin and Mandy as though everything was normal whilst staying relaxed. Once Mandy had been with us for a couple of hours (I think?), she suggested a VE to see how dilated I was. Although I thought I would be against the idea, I was actually quite keen to see if I was at all dilated knowing that I only wanted to get in the birth pool near the end of labour. The examination wasn’t the nicest thing I’ve ever been through, but Mandy was able to confirm that my waters hadn’t broken, and that I was 4cm dilated. I was really surprised as I expected it to be a lot less (because I’d been dealing with the surges so well). For the next couple of hours I spent most of the time on my exercise ball and moving around the house, walking up and down the stairs etc, trying to bring the baby down. Martin was with me through every surge as he’d also been listening to the hypnobirthing mp3s, and he was very good at saying the right things to help motivate me through and keep me calm. At around 2.30am, during a surge, I felt a pop (it felt like a baby kick, but very low down). I expected a gush of water but only felt a trickle. Mandy explained that as my waters broke, the babys head would’ve dropped and acted as a plug (exactly what she was hoping for!). Once Mandy had checked my waters were clear she explained that the surges may now become more intense…she wasn’t wrong! After two more surges, which seemed close together, I got in the pool around 2.45am.

From here on it all seems a bit of a blur. I really went into myself and now understand what people mean when they say they go to ‘labour land’. The surges had become much more intense, I felt I really needed Martin with me for each one, I had to really focus on my breathing, and I had become a little non-responsive as between each surge all of my focus was on relaxing. At some point I asked Mandy if I could try some gas and air with the next surge which she got ready for me. I tried it for 3-5 surges but found that breathing through the mouthpiece really threw me off of my breathing techniques. I found that breathing how I’d practiced for so long was much more effective so I stopped using the gas and air and refocussed. At around 3.45am a second midwife arrived (Sarah). I was aware of her arriving and calmly introducing herself, but I’m not sure that I managed much more than “hi”! By this point I was getting at least one intense pushing sensation with each surge, but knew I couldn’t feel the babys head low enough in the birth canal. I was really trying to visualise everything opening up and relaxing, rather than tensing up which would’ve been so easy to do. Over the next half an hour or so the pushing feeling intensified and I really relied on Martin being there with me, talking me through each surge, reassuring me that I could do this, and holding my hands giving me that extra strength which I really needed. I could really feel the baby moving down, and by the time I could feel the babys head really low I was needing to push with almost every breath throughout each surge. This is when the midwives really sprung into action (before now they were very good at letting me and Martin cope together). I wasn’t entirly aware of what the midwives were doing around me as I was so focussed, but this is where Martin started to get really excited. I could feel the change in him. The excitement in Martin, and knowing the midwives had started to prepare things, really gave me the boost I needed after feeling a little exhausted. I knew my baby was almost here! I could feel the baby starting to crown – in preparing for my labour I had used an ‘Epi-NO’ which really prepared me for this feeling and kept me calm. The pushing sensation was at it’s strongest. It completely took over my body, I couldn’t control it so I tried to relax as much as possible to let my body do what it needed to do. Over the next surge or two, I knew the babies head was starting to come out. At the end of one of these surges I felt the baby retract and start to go back inside! I couldn’t believe that after feeling like I’d been pushing and progressing so well that it seemed to be going backwards! I said to the midwives “IT’S GOING BACK IN”! They very quickly reassured me that it was totally normal and with the next surge the babies head would be out, for good, and they were right. One of my most vivid memories is when the midwives told us that our baby has lots of hair (!), their eyes are closed and they have no idea they’re being born. A few contractions later, and lots of intense breathing/pushing, the midwife said “one more surge and your baby will be here”! I couldn’t believe it. I was told to lean back and as I did, I instinctively reached between my legs to catch my baby and bring them up to my chest. I’d done it!! I rested back against the side of the pool holding my new baby against my chest, I really couldn’t believe it was a baby – the entire time I was pregnant I couldn’t comprehend that my bump was actually going to be a small human! The midwives were right, our baby had a full head of hair! I looked up to find Martin thinking, “oh my goodness, I have our baby!!” only to see him holding his phone, not what I expected, but he was recording our babys first breath…wow! After a few minutes of me and Martin looking at our baby, being totally absorbed in the moment, I heard Sarah say “you don’t even know what you have yet”, and this is when I realised that, after thinking it would be the first thing I’d want to know, I still didn’t know whether we had a boy or a girl! Martin looked and announced that we had an amazing baby girl. Little Luna Rae was born at 5.43am on Monday 24th July, and is absolutely perfect. After months of preparation, plenty of reading, practicing breathing, relaxation techniques, and listening to mp3s I’m extremely proud to say that it was all totally worth it and I had, what I felt was, the most perfect labour and birth.