Baby Matilda's birth - 'eventful' yet calm and in control 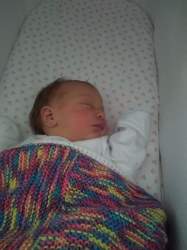 On Wednesday, at 40+5 days in the evening I had some bleeding and baby had been a bit quiet.  After a call to RBH we were called in to get checked over.  Waiting to be seen by a Midwife seemed to take forever, and I was incredibly nervous.  Jack kept reminding me to do the easy breathing to keep calm, which really helped in the very stressful situation.

After assessment, baby Matilda was fine, however my blood pressure was high and so they kept me in overnight in a ward to be monitored.  At this point, I was having mild period-like cramps. Jack couldn’t stay on the ward, so from 3am I was by myself, trying to get some sleep, but the cramps were getting stronger and coming every 5 mins or so.  I asked to be assessed and was told these were mild surges!

This wasn’t the environment I was expecting to start my labour in, but I used the mountain Breathing through the surges, and easy breathing in between to keep calm without Jack around.

By the time Jack came back at 8.30am, the surges were stronger and closer together.  Jack was able to soothe me during the surges by doing some of the back massaging, which really helped. I asked for an assessment and was told that I was already 5cm dilated!  We were massively surprised and were transferred to the Delivery Suite.

As the surges grew even more intense, I continued to use mountain breathing, TENS machine and gas + air to get through each one.  I found the mountain breathing really helped, as I knew how many breaths each surge would last, visualising the peaks and troughs of the surge. Jack was amazing, continuously rubbing my back, telling me how well I was doing, getting me drinks and snacks, reminding me to breathe and relax.

Labour progressed well and 4 hours later I was 8cm dilated.  The Midwife sought a second opinion as baby appeared to be coming out face first, and as my waters hadn’t broken, this was making the assessment slightly more awkward.  The second Midwife suggested moving into several different positions and using a peanut ball to get the baby to twist slightly.

I then began to feel my body push, which the Midwife encouraged me to allow to happen.  This continued for over an hour, going with my body as it pushed.  The Midwife then assessed me again and decided to get a Doctor to take a look at the odd positioning, and if required to break my waters.  The Doctor suspected the baby was actually breech, and so we had an ultrasound to confirm.

The Doctor then discussed with us our options: either continue to push and deliver breech, or to have an emergency Caesarean-Section.  After weighing up the situation and the potential risks (quickly…), we decided the C-Section was the best route to take.

It then got very busy with lots of people discussing risk factors and needing consent for various procedures. This was a little scary but I continued to use the breathing techniques to stay calm and try to be level-headed. At this point I had to stop pushing, which is easier said then done as I had little control. I went back to mountain breathing through the contractions, now trying to fight the urge to push.

Throughout the C-section I used the visualisation techniques and breathing to remain calm and finally Matilda Peggy Wallis was born at 17:59 on 17Oct19. Unfortunately, as she was born, she also pooed so I had to wait a few minutes for skin to skin cuddles but once I had her in my arms, they were the best cuddles ever!

Whilst this wasn’t in any way the birth I had planned or expected, everything we learned in the hypnobirthing classes allowed us to stay calm, and support each other, and I honestly believe without the breathing techniques we learnt, I would have needed more pain relief and been terrified during the C-section! Instead, everyone commented on how calm I was and took everything in my stride. 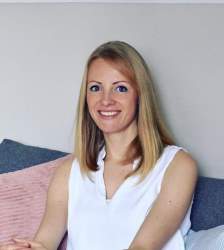