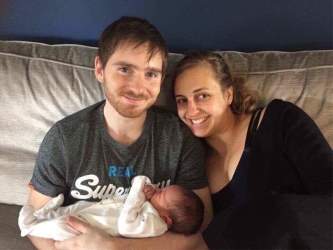 I was 39+3w and had seen the consultant Tuesday morning as my bump measurement was on the 95th percentile! We were offered a sweep there and then, and the option to book an induction at a later date. I was a bit overwhelmed and in my hormonal state, the thought of speeding things along a bit was tempting! Will and
I took time out to discuss the option and used the BRAIN acronym to help us make the decision to decline all intervention at this time – baby would come when he was cooked and we didn’t believe he was going to be ‘huge’. The consultant also offered an additional scan to estimate his weight later in the week, but on the basis of the 20% margin for error at this late stage we declined. So off we went home knowing we had made the right decision for our family…

I spent the rest of the day being pampered and had booked a manicure and pedicure before heading off to pregnancy yoga. Half an hour into yoga and I was taken by complete surprise when my waters ruptured!!! Will came to retrieve me and we pottered off home to set up our ‘zone’.

Surges started half an hour later, and unbeknown to me, quickly reached three in 10minutes. I was calm and breathing through the surges with my trusty TENS machine, whilst listening to various relaxation tracks. My memory becomes hazy here but at some point (about 3 hours later) we called the Mulberry Suite and headed over to Frimley Park.

Surges were coming thick and fast as we walked from the car. Will reports during this whole time that he only knew when I had surge by my clicking on/off of the TENS machine! Once on the ward the midwives were really positive about our Hypnobirthing and were amazed at how I’d coped so well at home. Although we weren’t keen on examinations, one was required for me to use the pool as the midwives weren’t sure if it was too late and he was about to make an appearance already. The examination revealed I was 9cms. The midwives were on it at this point and quickly encouraged me to get in the pool asap if I wanted a water birth. Once in the pool, the relief was amazing and I remained in my zone breathing through the surges. Bearing down took a couple of hours and towards the end, the midwives were keen to get him out soon as his heart rate was slowing. This was enough of a nudge for me to change position and breathe him out! Benjamin came quietly into the world (so calmly in fact he was taken away briefly to be checked/make him cry!).

Will and I are still in shock at how calm and relaxed I remained throughout. I completely embraced the intensity of the surges and I’m sure that helped keep the total length of my labour to 7 hours! We cannot thank you enough for all your support and unrelenting faith in our ability to achieve a calm birth.