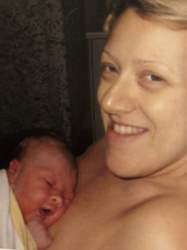 So 9yrs ago tomorrow at 11.47am the most incredible life changing moment happened, I became a Mummy.

Giving birth to our first son Charlie was the most incredible moment of my life.

At the time I have birth to Charlie I still worked in the NHS but I was no longer a Midwife.

My childhood dream to be a Midwife the focus of all my studies had ended a few years earlier. My time as a Midwife was wonderful in many ways but it was also a really challenging time. Those years working a s a Midwife led me to question … are women’s bodies actually any good at giving birth?

I had always believed that women were made to birth the very human they had just spent 9mths growing!

But my Midwifery career changed that.

So fast forward to 2009 and during my pregnancy with Charlie I planned a home birth from the start. It was hard for me to ignore the memories of the generally smooth and flowing home births I had as a Midwife opposed to the many highly medicalised births I had witnessed in hospitals. So my decision was made.

At this point I had never heard of Hypnobirthing though I had spent time listening to some relaxation CDs and remember feeling excited about birth, I don’t remember feeling scared or fearful at all.

Somewhere inside me I knew I was made to do this. I refused to believe that women’s bodies would grow a human and then not have the perfect system to birth that human!

I look back at Charlie’s birth now, and with hindsight I can see what led to it being long and slow.

As soon as my waters released in the early hours of the Sunday morning, I got excited very quickly, put the lights on, woke up Paul, texted my mum and my sister. The baby was coming!!!!

Except he wasn’t not just yet.

Oxytocin the incredible hormone who’s job it is to make your uterus surge (contractions) is shy, it likes to do its stuff in the dark, unwatched and undisturbed.

So me creating an environment not dissimilar to Blackpool Illuminations really wasn’t conducive to Oxytocin, and yep you guessed it my surges didn’t start!

All through the Sunday & Monday I had very irregular surges, it was only the Monday evening that things started to pick up. One very clear memory I have have was a feeling of being ‘observed’ and clock watched by the Midwife. Frequent examinations (I didn’t know I could decline them!) just seemed to interrupt my flow and would seemingly slow the surges down!

So at about 8pm the Midwife examined me again and I was 6cm dilated, YES I thought this is it I’m well on the way!

The Midwife left and came back at 7am on the Tuesday morning, I had been surging all night and I was exhausted.

She examined me again to find me still 6cms.

I was gutted! At this point and with long term issues with my hips and pelvis I knew it was right to transfer into hospital, worried that he was struggling to navigate my pelvis.

So blue lights (though no real emergency) and I arrived at hospital. I always remember how my husband Paul arrived at the hospital even before I did in the ambulance, he assures me he wasn’t speeding!

I was examined again and was found to still have the forewaters intact. I declined to have them released confident they would release when they were ready, I also declined Syntocinon to speed up my surges, they were very keen I should accept the syntocinon, but the baby was happy and so I was happy to give it some time.

However when the Midwife was examining me she ‘accidentally’ released my waters!

I remember feeling so sad as my goal was to give my body the best chance of birthing my son itself.

The surges started to come thick and fast, I breathed through them, and I got on the bed because she asked me to.

It amazes me that I did this, I know that staying upright is so beneficial to birth but even I felt vulnerable as a birthing women and that I should do as I was told!

And there on the bed experiencing the most intense and overwhelming sensations I had ever known I remember feeling a sense of incredible power.

It was the first time in my whole life that I trusted my body that I knew it was capable of something amazing. There was no denying that it was moving a human through it, as the surges changed to the incredible expulsive surges that would release our baby I have never felt so powerful and strong.

Charlie was born with no instruction from anyone, just me, following and going with what my body was telling me. I remember the Midwife telling me to stop pushing as she needed to check if I was fully dilated, I politely declined.

I have never been more amazed by what my body was capable of. The intensity of the surges was incredible as was my ability to breathe through them.

It was amazing how interlinked my mind and body where as I stayed calm and believed I could do it and I did.

And it was this moment, the moment I have birth to Charlie that triggered something in me.

It reignited my belief that given the right support and the right environment, one where Oxytocin will flow and adrenaline is kept at bay.

One where we are supported and told we can do it, rather than hearing endless stories that convince you that your body isn’t capable. It is then that birth will happen.

Yes birth like life can be unpredictable, some women may need some support and assistance but generally and for most women birth will happen.

Thank you Charlie for making me a Mummy and for lighting my fire and passion for supporting women and birth.

Click here to read all about my Hypnobirthing home water birth with my 2nd son Alfie in 2013.