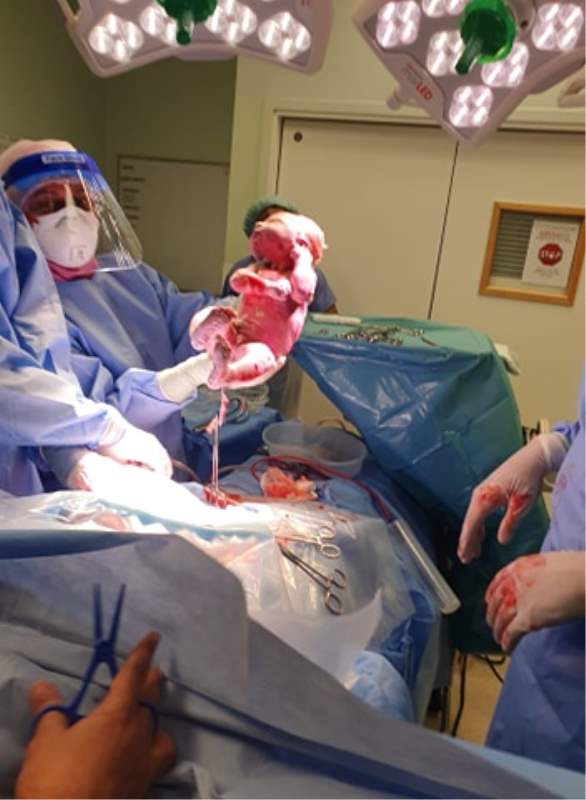 I have always been adamant if I were to have a baby I would want a home birth. Since losing my dad as a teenager hospitals and medical situations have made me especially anxious, how I ended up married to a paramedic is beyond me!

Thankfully after a little research my husband was supportive of my feelings and we made the decision to homebirth using hypnobirthing together.

We were all set for a homebirth when Covid shut them down. This really threw us and Hannah offered lots of additional support, talking us through what to expect and how to keep our birth has personal as possible in a medical environment.

I was offered a routine GTT test at 28 weeks and diagnosed with gestational diabetes as my test results came back at 7.8 the lowest ‘positive’ reading. Hannah provided my husband and I with lot’s of support and information which allowed me to decline precautionary drugs and manage my diabetes with diet and exercise alone, Covid meant I had to attended the diabestes clinic and consultant appointments by myself but I felt empowered and informed during these conversations using the BRAINS technique. I was able to make decisions for myself and tailor my journey to the needs of myself and my baby as individuals rather than follow the blanket guidelines suggested as my readings remained well within the required range throughout. My midwife later told me that being able to do so had kept my birth options wide open.

An additonal scan suggested baby was on the large size but a further scan contradicted this (she was 7lb 13oz). When the homebirth service reopened I was approved for a homebirth following a care outside of guidelines conversation. Work I had done with Hannah and advice from my amazing midwife Kerry made this conversation easy and informative rather than intimidating.

The exact timeline of my birth has sadly become a bit of a blur however I was offered a sweep on my due date but it was unsuccessful baby just was not ready. Two days later on the Wednesday we tried again this time the sweep was successful and by the early hours of Thursday morning appeared to start things off which was very exciting!

By midday Thursday my contractions were more regular and by Friday a midwife came to visit and cofirmed she believed I was in early labour but baby was in a difficult position. She suggested mutliple positions and exercises to help them turn. I did these religiously using Hannah’s hypnobirthing techniques to help relax me (they even helped me get in some much needed sleep).

By 9pm Saturday night my waters had started to go which was confirmed on Sunday morning. I was told I had 24 hours to give birth or there was a risk of infection and baby still was not fully turned. My husband and I used all the information we had been given and agreed to go in to hospital on Monday for an induction to speed things up if need be. I started to use my tens machine and we believed we would be meeting our baby soon.

Over the course of Sunday my contractions became much stronger but were still 10 minutes apart. My waters went fully around 5.30pm and we were super excited however I was concerned there may be meconium in them this was confirmed by a whatsapp image to a midwife and we agreed to go to the hospital for delivery.

I wanted to have a quick shower whilst my husband quickly packed all of the candles, lights, diffusers etc we had set up at home as we understood how important our birthing environment was. Whilst I was in the shower my contractions became very frequent and we rushed to the hospital the disappointment of not getting our homebirth was outweighed by the excitement of meeting our baby.

We arrived around 7pm and had requested the pool and were able to have it however it was still being cleaned as we arrived resulting in a brief seperation from my husband due to Covid which really knocked me out of my zone and I lost some of my ability to breathe and use the hypnobirthing techniques that had got me through the past 4 days! Fear, tension pain is soo real!!

Wireless monitoring was not available to use so I was attached to the machine however I was able to communicate that I wanted to remain as mobile as possible and was supported to do so. My husband joined us as soon as possible and by this point I had accepted gas and air and was insistent I wanted an epidural, my husband was encouraging me to wait as I had previously requested he did. They were not seeing the variation they hoped with our babies heart rate and an emergency c section was suggested. Fluids and a review in 20mins were offered as an option however it was made clear to us if they did not work things would be more serious than they currently were. At this point my husband and I agreed to an emergency cesarean and our daughter arrived at 9.16pm. My husband was with me throughout the c section but have to leave us after just 45mins in recovery. It was the middle of the night and I found myself totally alone with a new baby on a hospital ward. So far from my planned homebirth!! The breastfeeding advice Hannah had previously given me was invaluable as I felt more confident than I would have without it when alone on the ward (though staff there were helpful). My husband turned to Hannah for support regarding medication during my recovery and she offered lots of reassurance which I know he found very useful. My recovery has been slow, I got an infection and have struggled with the fact I was not able to have the birth I wanted. Having a C section robbed me of an experience I was so ready to embrace but allowed us to welcome our healthy happy daughter into the world which is ultimately all that matters. I have no doubt that without the techniques Hannah taught us things would have been a lot more stressful for the three of us and we will always be greatful.

This is the very first photo we have of our daughter and we have not yet shared it with anyone. In some ways I felt it showed my failure (I am working through this), she didn’t slide out in the water, her mummy and daddy were not the first people to hold her, cord clamping was not delayed in the way we wanted. Instead she is held by a stranger in PPE in a theatre under bright lights. But we have come to accept this is no less beautiful because this is the moment she entered our world and changed everything for the better. 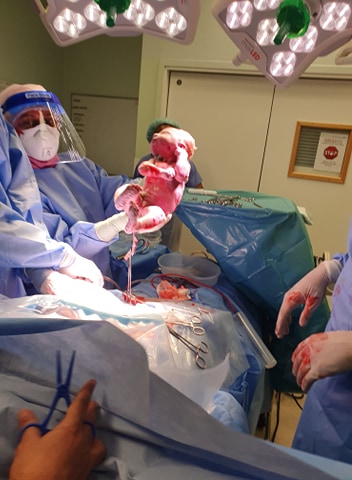