THE BIRTH OF EVERLY 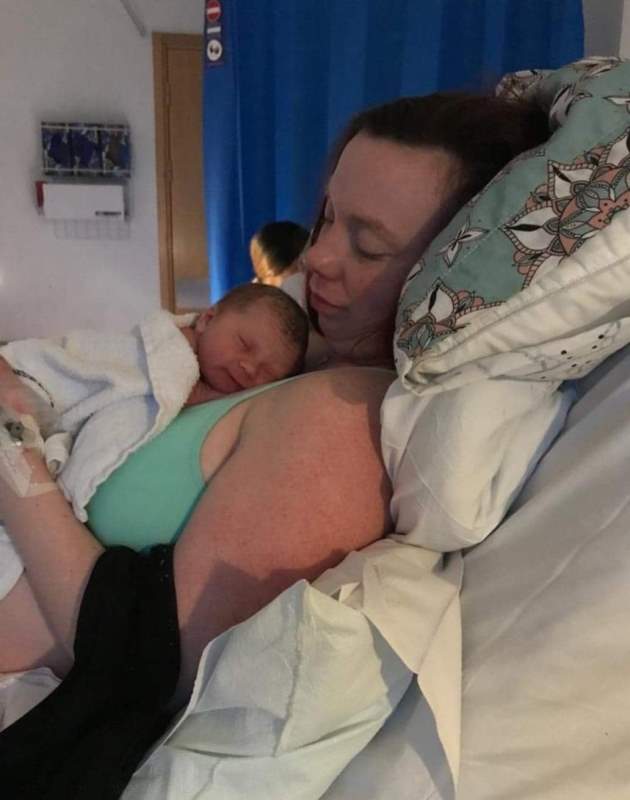 
2nd March before bed I decided to get on my ball for the first time and started doing all the suggested exercises. I woke up at 4am with what felt like period pains, I thought it could be Braxton hicks but wasnt sure as I’d not felt them before. I took the opportunity to practise my hypnobirthing breathing through them anyway and fell back to sleep. These carried on throughout the day, slowly getting longer. I still thought they were Braxton hicks and was underestimating how well I was handling them, looking back they were obviously early contractions. When my partner got home from work at 7ish that evening they started to get stronger and more frequent. I was still in denial it was labour ???? I carried on painting the draws for my babys nursery and they were coming every 15/ 20 mins or so. After finishing the drawers and messaging my Mum and sister asking their opinions on whether this was it, I downloaded a contraction timer as I could no longer talk or stand through the contractions.

By 10ish they were coming every 5mins so I called the hospital, they told me to call back when I was getting 3 within 10mins, advising it would probably be in a few hours. 20 mins later I was having contractions every 2 mins, so called back and was told to come in. I was so excited and a little nervous, I just carried on breathing through them and was chatting and laughing with my partner inbetween each one on the drive.

Before going to the delivery suite I was in the triage bit for ages! The midwives attempted to take bloods which took over an hour. Contractions were getting stronger but manageable, but I was so uncomfortable as there were women either side and in front of me sleeping or being monitored, I just wanted to get into the delivery suite and into some private space. They kept offering gas and air but I was coping just with breathing and visualization, I felt like I didn’t want to use it too early (not sure if that’s how it works but it made sense to me at the time). I had a ve and was 3cm. My waters broke shortly after this, literally felt like they burst, I freaked out a bit as I didnt realise it was my waters and when I did, it was just not what I was expecting that to feel like. Everyone says its not like it is in the movies, but I feel like mine was ???????? There was a mini explosion of water haha.. The midwife helped me change my underwear, which we thought she had put on the wrong way round as we really struggled to put them on. Me and my Mum thought this was hilarious ???? Underwear finally on I walked round to the delivery suit having to stop on the way because of contractions.. I felt alot more relaxed once we got into our room as there was just my midwife, a student midwife my partner and my Mum. The midwives were so respectful of my birth plan and dimmed the lights as my partner put our affirmations, lights and pictures up around the room, although my eyes were closed the whole way through the labour so I didn’t really look at them, but the room did look relaxing and just how we wanted.

Contractions were getting stronger and I was now using the gas and air with breathing and visualizations. It was so intense as I didn’t feel like there was any time between one stopping and another starting. I was told I needed to empty my bladder and needed to make my way to the bathroom after my next contraction, by the time I got to the toilet I was contracting again. I found this part quiet difficult, but my Mum came in got me back on track with breathing through the contactions which really helped! A few hours passed of constant contractions, I remember feeling so exhausted by this point and wishing I could sleep. I was told I needed to empty my bladder again which the midwives did with a catheter. As soon as my bladder was empty I felt the need to push! When telling the midwives they said I had another hour before needing the 2nd VE to check how dilated I was, I dont think I was being fully believed. I kept telling them that I could feel my body needing to push.

My plan was to have a water birth, they explained I needed to be 5cm before I could get in it, and it hadn’t been long enouge yet. I continued to tell them I needed to push so they did another VE – I was 9cm. I had gone from 3cm to 9 in just over 3 hours. The midwife offered to get the birth pool set up, but as I was 9cm and the thought of having to get off the bed and move was not appealing! I was laying on my side with my partner massaging my back and my Mum helping me keep up with breathing. A monitor was put on me and I was told to push as the babies heartbeat had dropped. I found this so difficult as it was constant pushing instead of when I could feel my body doing it naturally. I could feel my daughters head crowning, but then going back in as I stopped pushing trying to catch my breathe.
I didn’t want an episiotomy, but also wasn’t allowed one due to the bleeding condition I have, so the nurse was putting what felt like lube on me and was ‘stretching’ me. My mum told me to reach down and feel the babies head. This gave me the last bit of motivation needed and I pushed really hard, her head was out. I was in total shock as the next thing I knew they were placing her on my chest. I think my body just pushed the rest of her body out, I didn’t try and I didnt feel it. I just couldn’t believe it.

Unfortunately we had a very short cord and Everly couldn’t be put on my chest so it was cut and we didn’t get to have delayed cord clamping as planned.

I had three minor tears, midwives said they wouldn’t usually stitch them but did because of the bleeding condition. In ways I felt the stitches were more painful than the labour! I had to use gas and air with the stitches
It was 3hrs55mins from being 3cm dilated to having Everly in my arms ????????

I love looking back on my labour, and I’m so proud of how it went. It really was such a magical empowering experience. I would have cringed at myself saying that last year, as I don’t really like the word, but there is no other way to describe it. It truly was empowering. I wish I had recorded it as I would love to watch it ????

I’m looking forward to my next labour! I believe my story is such a positive one because of Hypnobirthing, not only how to manage ‘pain’ during labour, but because it gave me the confidence and belief in my own body to birth my baby ????