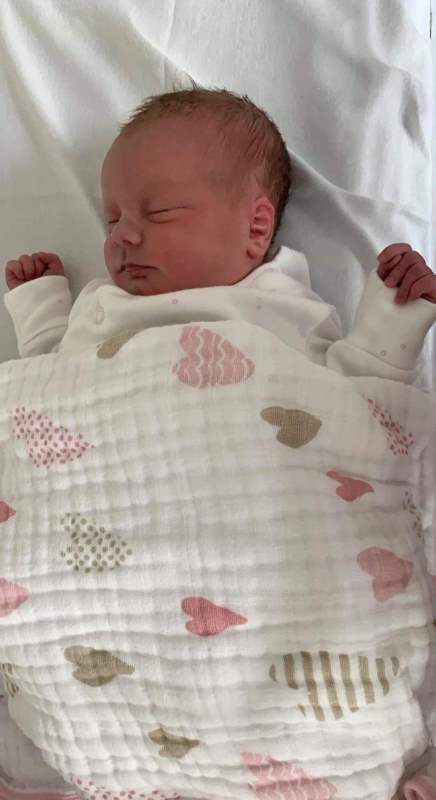 Baby Georgia was born this morning, at home (unintentionally ????)……
Lee and I had said until I saw the consultant midwife on Wednesday, if I went into labour I’d go into hospital as we wouldn’t have a ‘plan’ which was discussed and agreed with the team.

My waters went and woke me up at 0500 this morning, I got in the shower, put the TENS on while trying to warm up under the duvet in bed…. then didn’t want to move from my safe bed! The midwife on the phone to Lee at the labour ward refused to send anyone out to us and said I had to get onto the ward unless I was pushing…..

We started trying to make our way downstairs to the car. 4 contractions later (which were practically one after the other) and I could feel I was wanting to push, stupidly I went to the loo and lee called an ambulance. 1 push and her head was born, I yelled at Lee and he came rushing in with the ambulance lady on speaker phone got me off the loo and he caught her with the next push.

I could feel in myself that it was progressing fast, which is why I think I didn’t want to move from the bed, but never in my wildest dreams did I think I’d have her in the downstairs loo and Lee playing the part of the midwife ????????

Although we didn’t really have time to set up the environment with all the twinkly lights, birth pool, essential oils etc, I was able to use the imagery techniques and breathing square which proved invaluable and when I started crying about 20mins before she was born (because lee was behind me and I thought I was on my own) I knew I was transitioning and not going crazy! Which was incredibly powerful.

Thank you for all your help and advice over the last couple of month, it’s been invaluable, and I now have my own positive and enjoyable birth to be able to share with others ????