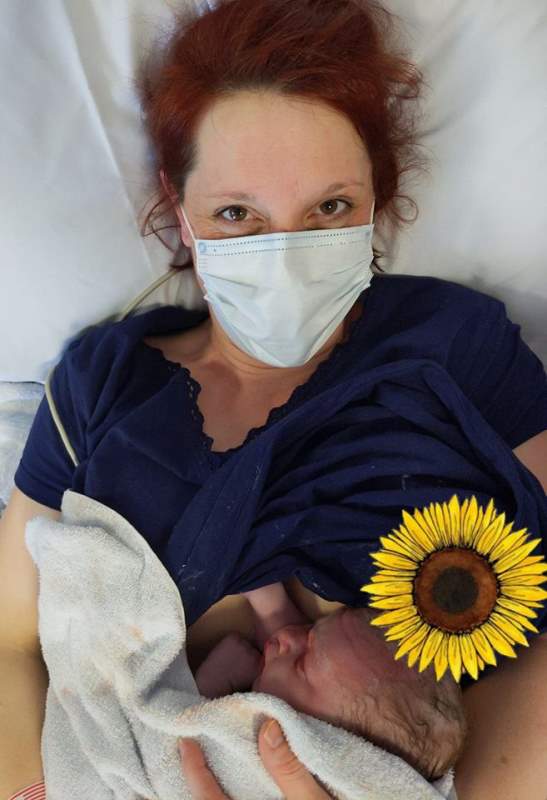 Hi all, I wanted to let you know that if you end up having to give birth without your birthing partner you will be totally brilliant and all will be fine.

This is a picture of me moments after giving birth taken by the amazing midwives at Ipswich Hospital in Suffolk in the Covid isolation maternity ward.

My son (7yrs) had come down with a persistent and new cough that was very prominent over last weekend. My due date was the following Monday and I was due a scan on the Wednesday after due in part because of my age. I turned 40 in September. Tuesday the hospital rang to ask if all was well and to ask next steps. I was all set for a home birth before all C19 started.

After a talk through with the senior midwife I decided that to ask midwives to come to the house with my son (and by Tuesday, husband as well, coughing) was not advisable and also to risk going into labour without provision ready at the hospital was unacceptable.

Therefore we made the decision that I would go into be induced on my own without my husband as he would be at home with our two children (boy 7 and girl 2). I was keen to go sooner rather than later in the week as I felt that the hospital would be getting inevitably busier as the days go on? I arrived at midday on Wednesday to go to the Covid 19 isolation maternity ward to be induced.

I have never been induced and wasn’t looking forward to it. (Only because I have heard some stories!) Gel applied at 1pm, contractions started by 2pm and baby born at 5.30pm. Pain relief was paracetamol and Tennis machine. I was offered gas and air but with my first labour it tended to make me sick. He came out face up, back to back and with his cord round the top of his head so needed a bit of help in the end with a kiwi suction cup and with the amazing help of the midwives and doctor but all the time I was helped, kept well informed and felt TOTALLY safe and supported.

I stayed in hospital two days after and came home later on Friday. Baby was monitored really well. Not necessarily due to C19 but due to jittering and I had slightly raised blood pressure. (No wonder!).

Most difficult things were not having the ability to show baby to my husband or his siblings apart from facetime. (Thank goodness for facetime!). Husband gutted not to cut the cord etc. Concerns about C19 and possible effects on baby.

Ipswich Hospital were amazing with their attention to detail in making sure infection control was managed both for them and me. They made me aware of every action and sequence of doing things and I am home with my little boy, his dad and brother (who is still coughing) and sister and the fact I “did it alone” is a far memory and one that isn’t really true as I had two amazing midwives of Harriett and Symonnne with me.

A long post and I chose to do it this way on my third labour, but I was keen to share so that, if like last week, like me, you are searching for some good news this might bring you some comfort.